A fascinating glimpse of Hyderabad 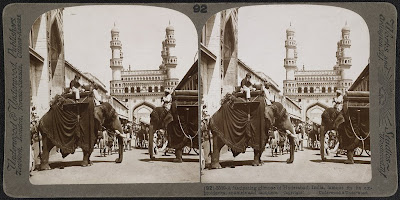 Stereographic photograph of Hyderabad in Andhra Pradesh, taken by James Ricalton in c. 1903, from The Underwood Travel Library: Stereoscopic Views of India. Hyderabad was founded beside the River Musi in 1591 by Muhammad Quli Qutb Shah (r.1580-1612) as an alternative to his capital at Golconda. The town was laid out in a grid pattern with two main roads running east to west and north to south; the Char Minar sits at the intersection of these two roads. The Char Minar, or Four Towers, seen in the background of this view, was built in 1591 to mark the centre of the city. This ceremonial structure comprises four imposing arched portals with arcaded storeys and geometric screens above. The four corner minarets are crowned with domical finials. They contain spiral staircases opening onto triple tiers of balconies. This image is described by Ricalton in 'India Through the Stereoscope' (1907), "Two of the Nizam's state elephants have intruded athwart the street and obstructed our view...These two have just come out from the great archway on the left; they are being brought out in readiness to convey some traveler to Golconda." This is one of a series of 100 photographs, designed to be viewed through a special binocular viewer, producing a 3D effect, which were sold together with a book of descriptions and a map. Stereoscopic cameras, those with two lenses and the ability to take two photographs at the same time, were introduced in the mid 19th century.