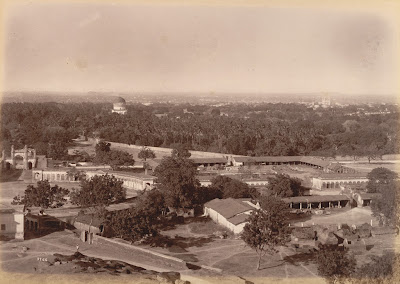 View looking over outlying buildings and palm groves towards the city of Hyderabad, Andrea Pradesh, photographed by Deen Dayal in the 1880s. This is from the Curzon Collection: 'Views of HH the Nizam's Dominions, Hyderabad, Deccan, 1892'. Hyderabad was founded beside the River Musi in 1591 by Muhammad Quli Qutb Shah (r.1580-1612) as an alternative to his capital at Golconda. The town was laid out in a grid pattern with two main roads running east to west and north to south; the Char Minar, or Four Towers, sits at the intersection of these two roads. Nizam al-Mulk, entitled Asaf Jah (d. 1748), founded the Asafi Jahi dynasty in 1724. The rulers, known as the Nizams of Hyderabad, reigned until 1948.